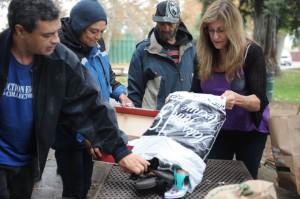 Mary Avanti, right, spreads shoes on a table at Lawrence Park as Eric Lantz, left, and Donna Evans, second from left, look on.

Donna Evans has gone down to Lawrence Park to grab a pair of shoes about five times now.

As Evans joined a group of people rummaging through a pile of sneakers, a man next to her called out, “Hey Ma, what size are these?”

“Those are about a (size) five,” Evans said.

Evans knows her shoes, because she used to sell them before she became homeless.

In the afternoon on Nov. 20, Mary Avanti headed to Lawrence Park to donate shoes as part of the Walk in My Shoes program, which she kicked off in September 2013. 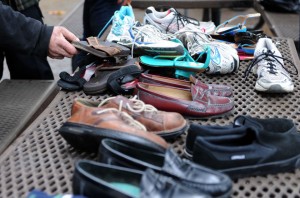 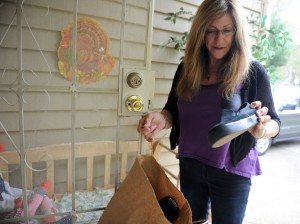 The program is simple. People drop off their new or gently used shoes at Avanti’s house, and she takes them to the homeless, usually once every week or two.

“I don’t know who gives them to me. I just open my door and they’re on my porch,” Avanti said.

Avanti isn’t sure how many pairs of shoes she has delivered, but as of Nov. 20, she estimated it had been about 50 or 75 pairs.

They come to her door in boxes and bags. On Nov. 20, she got a delivery of shoes from her niece, Christine Avanti, a nutritionist and writer living in Los Angeles.

It was a delightful surprise, Avanti said. People have been very supportive of her efforts, she added. 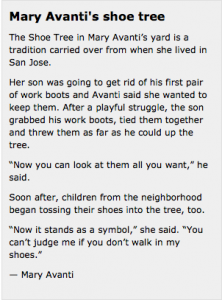 In 1969, Avanti was homeless for about five weeks. She lived out of her car with a 2-year-old daughter after being kicked out during a family dispute, she said.

After getting a taste of what it is like to be without a home, Avanti has a soft spot for those less fortunate then her, she said.

“I’m also real sensitive to people and their feet,” she said, explaining that she has had six surgeries on her own feet.

But that’s not the only reason she started Walk in My Shoes. Another inspiration for the program was a promise she made to a homeless man.

The man was diabetic, and suffered from infected blisters that led to the removal of two toes from one of his feet, and another toe from the other foot.

“That got me. It still gets me,” Avanti said. 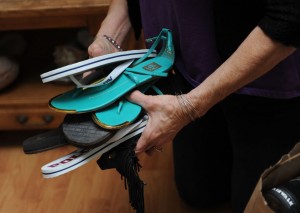 She told the man that if she had any shoes, she would give them to him, but he refused, saying he wouldn’t walk in her shoes.

Avanti then asked the man if he would feel more comfortable if she got the shoes from someone else and gave them to him. The man said he would.

So Avanti started the program a few months later, promising the man that she wouldn’t stop until every homeless person in Lodi had a pair of shoes.

She hopes one day Lodians will looks down at the shoes that homeless people are wearing and say, “Hey, they’re walking in my shoes.”